STSM by Philipp Marquetand, University of Vienna (AT) with Tamas Rozgonyi, Hungarian Academy of Sciences (HU)

Our understanding of strong-field ionization is still rudimentary due to the complex interplay of multiphoton transitions between initial, final, and intermediate resonant states, their dynamic Stark shift, the ponderomotive potential and many more fundamental processes. Strong laser pulses are necessary to investigate these processes and the results can be measured e.g. as photoelectron spectra. The question tackled in this STSM was, how the signals and dynamics of strong-field ionization change if different parameters of the laser pulse are varied. To answer the question, we used our previously developed method to simulate molecular strong-field ionization (SFI) in the presence of vibrational motion. Within this method, the ionic continuum is described by Legendre polynomials and the treatment of intermediate non-resonant states of the yet neutral molecule is simplified by the so-called adiabatic elimination of off-resonant neutral states.

We investigated pulses with a so-called triangular phase, whereby a pulse can be separated into two subpulses with a tunable time delay between them. As a result of such pulses, we obtained interestingly shaped photoelectron spectra in our simulations. The system under study is a one-dimensional model for Iodobromomethane (CH2BrI) including four electronic states of the neutral and three ionic states. Looking at the photoelecton spectrum, we found additional peaks when using shaped laser pulses compared to the outcome with unshaped pulses. Further investigation revealed that the new peaks stem from the same electronic states as the previously observed peaks, i.e., a peak originating from D1 splits into two. Further investigations and comparison to experiment are necessary to further understand these results.

Multiphoton processes in atoms and molecules are highly probable upon ultrashort laser pulses irradiation. When the molecule is a Van der Waals cluster, there is a certain probability that within the same aggregate, one monomer experiences a neutral fragmentation channel, and a different monomer suffers an ionizing process. Within this particular situation, if a second laser pulse arrives it will ionize the fragment under neutral dissociation, which will experience a Coulomb repulsive force with the charge neighbour. Thus, the kinetic energy of the dissociated fragment will be modified as a function of the distance between the charge fragments. The kinetic energy trace of the Coulomb repulsed particles can be followed in time, i.e. charge particles distance, using the combination of ultrashort laser pump-probe techniques together with Velocity Map Imaging detection systems.
Figures 1 show 2D contour maps of the Centre of Mass (CM) kinetic energy (KE) of CH3 as a function of the time delay for λpump = 266 nm and λprobe = 333.5 nm a. Three time-dependent KE contributions can be distinguished. 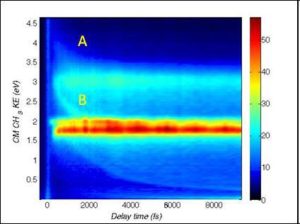 Coulomb repulsion trajectories for the CH3 fragment in repulsion with the other CH3I of the dimer were simulated for the most stable dimer geometries (details of the calculations not given here) and compared with the experimental Coulomb repulsion trajectories.
The comparison suggest that trajectories A and B converge asymptotically to the neutral dissociation channels of the CH3I in the A-band.
An article with the outcome of this STSM has been writing at the moment to be send to Phys. Chem. Chem. Phys. in the next incoming months.

The particular topology of the excited state potential energy surfaces (PES) of natural DNA monomers is the cornerstone of the photostability of our genetic material. [1] In fact, for these species the steeply descending nature of the spectroscopic state PES at the region connecting the Franck Condon geometry with the internal conversion funnel to the ground state prevents the retention of the wavepacket at interstate crossings, minimizing at the same time the transfer of population to lower lying excited states and other competing radiative emission processes, and therefore facilitates the relaxation of the population to the ground sate, Figure 1a. [2] This topology can be modified by altering the substitution pattern of the heterocyclic purine and pyrimidine skeleton, changing, thus, the intrinsic photophysical properties of natural nucleobases, Figure 1b.

This context frames the present STSM, along which we have explored the excited state deactivation dynamics of two modified nucleobases where one (4-thiothymine) or the two exocyclic oxygens (2,4-dithiothymine) of the natural nucleobase thymine have been substituted with sulfur atoms. To this purpose we have used the semiclassical surface-hopping algorithm developed in the group of Profs. Persico and Granucci, incorporating both non adiabatic and spin orbit couplings in the adiabatic representation. [3] These simulations were based on semiempirical PESs and couplings calculated from a reparameterized Hamiltonian with CASPT2 calculations. On the basis of these simulations we propose the following kinetic model for the deactivation of both systems: S2->S1->T2/T1. However, we also conclude, in agreement with previous experimental findings, [4] that the degree of substitution has a significant impact in the total triplet rise time, due to the very different excited state PESs topology predicted for both systems.

We expect to publish these results, together with the outcome of femtosecond broadband transient absorption experiments performed in the group of Prof. Crespo-Hernández from the Case Western Reserve University in Cleveland (Ohio), in a near future.

Figure 1. Schematic representation of potential energy surfaces characteristic of photostable (a) and photoreactive (b) chromophores.

STSM by Philipp Marquetand, University of Vienna (AT)  with Tamas Rozgonyi, Hungarian Academy of Sciences (HU)
On July 2nd, 2015 (8 days)
From AUSTRIA to HUNGARY

Strong-field ionization including multiphoton transitions is hardly understood yet due to the complex interplay of intermediate resonant states, their dynamic Stark shift, the ponderomotive potential and many more fundamental processes. In order to obtain nonetheless a simple and more intuitive picture, we have developed a theoretical description and a corresponding code, which makes use of two main approximations. All off-resonant intermediate states are not treated explicitly but removed by adiabatic elimination (ADEL) from the system of equations of motion. Furthermore, the ionization continuum is represented by a Legendre-polynomial based discretization approach.

In this STSM, we extended our code to include non-adiabatic coupling between multiple intermediate resonant states. In this way, we are able to test a hypothesis developed by our experimental partner, Thomas Weinacht (Stony Brook University), that such vibrational couplings are at the origin of some of the peaks in the photo-electron spectrum of Iodobromomethane. We have tested our new implementations, comparing a 0-dimensional, a 1-dimensional and our new 1-dimensional code with couplings. First simulations on a model with arbitrarily chosen parameters show that indeed non-adiabatic couplings can lead to additional peaks in the photo-electron spectrum, see Fig. 1. The model consists of a ground state |0>, two intermediate resonant states |i1>, |i2> and two electronic continua |c1>, |c2>. The states |0> and |i1> are coupled via a 5-photon process, while the states |i1> and |c1> as well as |i2> and |c2> are coupled via a 2-photon process, respectively. A non-adiabatic coupling between |i1> and |i2> can be switched on and off. If the coupling is present, an additional peak appears in the photo-electron spectrum. 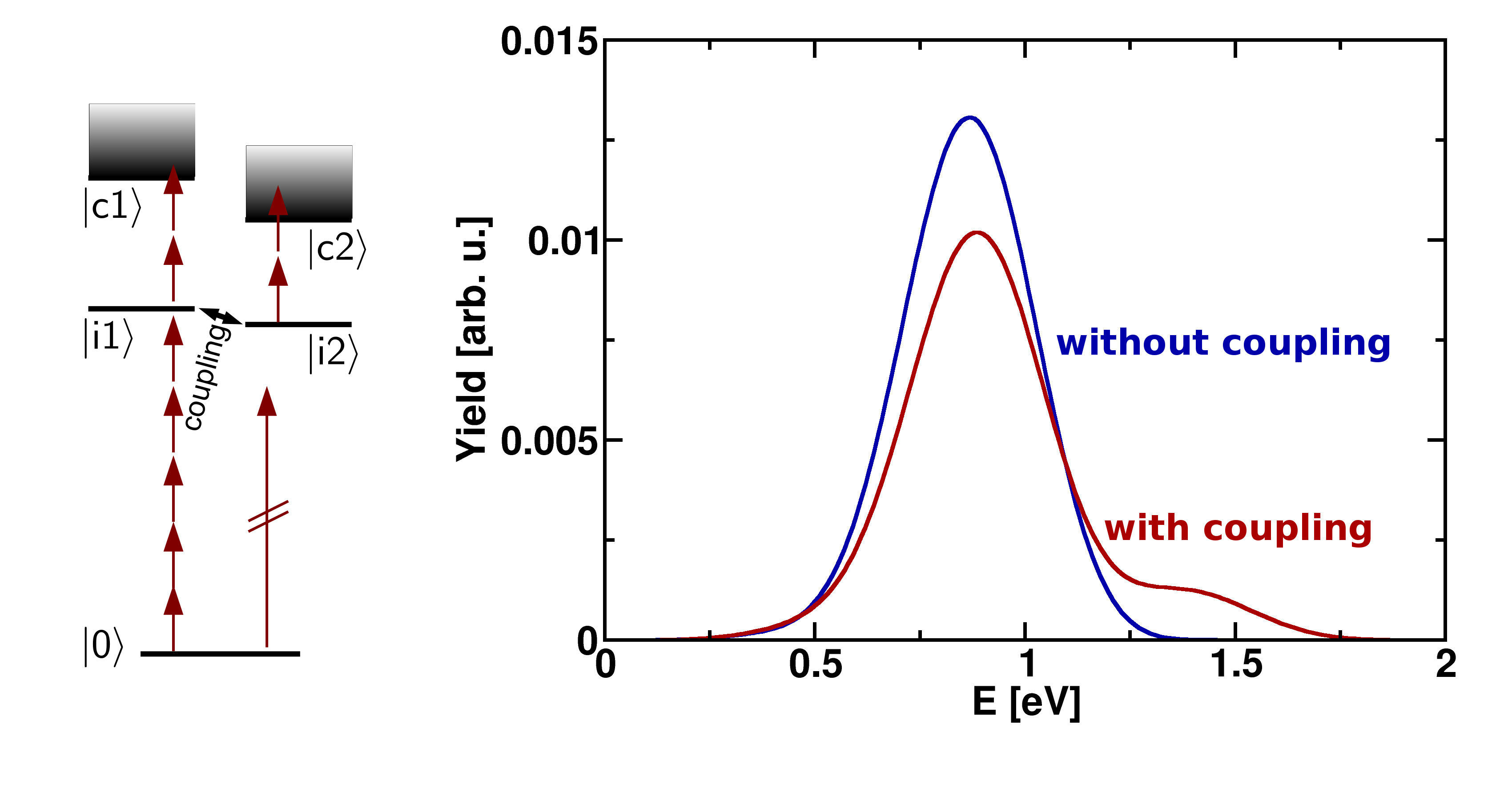 From AUSTRIA to HUNGARY

We develop a simplified theoretical description and the corresponding code for the quantum-dynamics simulation of strong-field multiphoton ionization. Any occurring intermediate off-resonant states are not treated explicitly in the propagation but removed by adiabatic elimination (ADEL) from the system of equations of motion. For the representation of the ionization continuum, a Legendre-polynomial based discretization ansatz (DIC) is used.
In this STSM, we evaluated various critical assumptions in the ADEL for the case of one-dimensional quantum-dynamics (QD). Especially, the validity of neglecting the kinetic energy on the states to be eliminated in the ADEL and the applicability of the multiphoton rotating wave approximation required in-depth consideration. The final equations of motion were integrated in a QD code and first tests showed an excellent agreement between the propagations of the full system including off-resonant states and when using ADEL.
In discussion with Prof. Dr. Thomas Weinacht (Stony Brook University) who was on a research visit in Budapest during the STSM we agreed on a concrete joint project for a mixed theoretical-experimental publication. The meeting was a short workshop aimed at theoreticians and experimentalists interested in using light fields to control molecular reactions. Invited speakers covered a range of topics in the field, such as control in condensed phases, strong field control, polyatomic light-matter interactions, attosecond pulse control. The idea was to bring together people from the different areas to exchange ideas and identify the present state-of-the-art and problems to be solved.

The structure was based on oral presentations including overview seminars from leading researchers, state-of-the-art research talks and presentations by young researchers. Posters were also presented throughout the meeting and at a focused poster session. There were long discussion time amongst participants. The number of participants was 39 from 11 countries with a mix of ages and career stages. There was a good atmosphere of discussion at the meeting. The final program of the meeting can be found below.

The Local Organiser,
Prof. Graham Worth
School of Chemistry, University of Birmingham, UK