The next edition of the School on Excited States that will take place in the Spanish CECAM node (Zaragoza, ZCAM) in April. The school is intended for beginners in the field of excited states (first year PhD and master students).
More information on the School can be found in the following URL:
http://www.cecam.org/workshop-1316.html

Please note that registration will be open until March,1st, and that the number of participants will be limited.

Unfortunately, this year the COST is not directly involved in the organisation, so there is no extra funding available for the COST members.

Ionizing radiation can bring an atom to a super-excited state that survives for an infinitesimal time before emitting one electron. Using advanced attosecond interferometric techniques, XLIC researchers from Lund, Madrid, Paris, and Stockholm have now resolved the collapse of such state in time, finally confirming a theoretical prediction formalized more than 50 years ago that has its roots at the very beginning of the quantum revolution.

When irradiated with light with sufficiently high frequency, such as extreme ultraviolet rays or x rays, matter emits electrons; this is the celebrated photoelectric effect. To explain this effect, in 1905 Einstein suggested that light was composed of photons, small packets of energy that provide individual electrons with enough momentum to escape the Coulomb attraction of atomic nuclei. Some twenty years later, quantum theory finally provided the theoretical framework necessary to formalize Einstein’s intuition: matter does exchange energy by quanta, and, in the simplest scenario, the absorption of an ionizing photon is accompanied by the instantaneous emission of an electron wave packet.

In 1933, H. Beutler [Z. Physik 86, 495], an experimental physicist, showed that things were not as simple after all. He found that the absorption spectra of rare-gas atoms above the ionization threshold exhibit wide peaks with anomalously asymmetric profiles. These peaks indicated that the atom, instead of being instantaneously ionized, could be temporarily excited to some unstable state, hence the finite width. The meaning of the peak asymmetry, however, remained obscure. The following year, Enrico Fermi, then a professor in Rome, assigned this puzzle to Ugo Fano, a 22 years old post-doctoral collaborator, who published the provisional results of his investigations in 1935 in an Italian journal. According to Fano, the asymmetry of photoelectron absorption peaks arise from the interplay between the direct-ionization wave front, predicted since the beginning, and the trailing emission from the collapsing excited atom. Due to the dispersive character of electron waves (more energetic electrons move faster than less energetic ones), the latter component catches up with the direct wave front, carving a trough where the two waves interfere destructively. It is this interference that skews the spectrum of the electrons from the decaying atom, which would otherwise be a perfectly symmetric Lorentzian peak.

Fano had to interrupt his studies of atomic photoionization due to the precipitating historical conditions that eventually lead to the outbreak of WWII.  For more than 25 years, his 1935 paper, which was written in Italian, was all but forgotten. In 1961, Fano managed to resume his studies, publishing a second more refined English version of his work which soon became one of the most cited physics papers of all times. Since then, the characteristic asymmetric photoelectron energy distribution predicted by Fano’s theory has been confirmed for countless systems. One inherent aspect of the phenomenology modeled by Fano, however, that is how the direct and resonant wave packets come together in time to give rise to the final spectral asymmetry, had eluded any direct experimental confirmation for all this time.

In a paper published on February 18th in Nature Communication, researches from Lund University, Universidad Autónoma de Madrid (UAM), Université Pierre et Marie Curie in Paris, and Stockholm University have announced that they have finally closed this long-standing gap. Using a novel attosecond interferometric laser technique developed in Lund by the experimental group of Professor Anne L’Huillier, the authors were able to compare in detail the structured wave front generated by the resonant ionization of the argon atom with the simpler direct-ionization wave obtained at energies where no metastable state is excited. Their finding closely matches the prediction of the Fano model, which researchers from UAM have extended to the multiphoton regime entailed in the experiment. This finding, which is the first “observation” of the collapse of an autoionizing atomic state, opens the way to the detailed study of the ultrafast photoelectron dynamics, which plays a fundamental role in many processes triggered by energetic light in matter, from radiation damage of biological tissues to charge emission in photoelectric cells.

We are opening a postodoctoral position in attosecond physics at Lund University.

A description of the position can be found in the links below.

Go to the online announcement

Ikerbasque would like to inform you that we have launched a new international call to reinforce research and scientific career in the Basque Country. We offer:
• 15 positions for Promising Researchers Ikerbasque Research Fellows
o 5 year contracts
o PhD degree between Jan2006-Dec2013
o Support letter from the host group is mandatory
o Deadline: April 4th at 13:00 CET
For further information, please visit www.ikerbasque.net
We would appreciate your help in disseminating this information, in case you know about any colleague that could be interested and meets the requirements of the call.

The group “Theory and Modelling” at the University of Evry-Paris Saclay (LAMBE, UMR CNRS 8587) is currently seeking candidates for PhD positions. Deadline for applications is 11th April 2016, for starting dates in Sept-Oct 2016.

The group is internationally recognized for its expertise in ab initio molecular dynamics simulations (AIMD: DFT-MD, MP2-MD, semi empirical-MD, QM-MM-MD), with original research activities in the gas phase, liquid phase and at interfaces between solids and liquids & between liquids and air. 4 ANR funding are currently active, 2 of them in collaborative works with the USA, 1 with Germany, and 1 with IFPEN petroleum company.

4 PhD positions are opened and are described in more details on the website of the Paris-Saclay Doctoral School “Chemical Sciences” 2MIB (http://www.universite-paris-saclay.fr/fr/formation/doctorat/sciences-chimiques-molecules-materiaux-instrumentation-et-biosystemes-2mib, click on ‘Sujets de Thèse’ & ‘Offre de sujets de projets doctoraux’). Subjects are described in French and in English.

Opened research topics for PhDs are:

We welcome candidates with background in Chemistry, Physics, Chemical-Physics, Master courses with a large component in theory and simulations, good knowledge in solid state physics would be a plus for one of the subjects, knowledge of one coding langage would be welcome.

A post-doctoral researcher position is presently available to join a new collaborative program between the Attoscience and Ultrafast Optics and the Ultrafast Optical Dynamics of Solids groups at the Institute of Photonic Science (ICFO).

The position is dedicated to attosecond charge dynamics and ultrafast phase transitions in condensed matter, including organic materials and superconducting films. The experimental research will be conducted at the soft-X-ray beamline at ICFO which is the first to produce high flux single attosecond pulses covering the soft-X-ray water window up to the Oxygen K-shell edge at 534 eV (1,2). These unique experimental capabilities will be leveraged to develop and exploit attosecond soft X-ray absorption spectroscopy which will permit, for the first time, to interrogate a material’s dynamics (3,4) on the atto- to picosecond temporal scale in combination with element selectivity. The experiments will be supported by measurements at facility scale light sources such as synchrotrons and free electron lasers. The success of the project will have impact across the fields of attoscience, ultrafast physics and material science with clear potential for high profile scientific output.

Environment: Our friendly and stimulating environment includes state of the art laboratories with several unique and cutting edge few-cycle and tunable light sources ranging from the soft X-ray to the mid-infrared. Supporting infrastructure includes facilities for material growth, preparation and diagnostics. We are embedded in several prominent national, European and international networks as well as collaborations which ensures a vibrant and stimulating international research environment.

Position: We offer a postdoctoral position to a highly motivated and dynamic young scientist who wishes to enhance his/her scientific career in an emerging new field which resides at the forefront of attosecond science, soft-X-ray spectroscopy and ultrafast dynamics. The candidate will conduct experimental research within our existing teams and on the first attosecond soft X-ray beamline. The position is available immediately and initially offered for one year with the possibility for extension.

Qualification: We are seeking an enthusiastic candidate with experience in ultrafast spectroscopy and pump probe methodologies. Ideal is a background on time resolved soft X-ray absorption spectroscopy or diffraction and familiarity with high harmonic setups, or slicing sources, laser based X-ray generation or free-electron lasers. Diligent work ethics, interest in cross disciplinary work and an aptitude for problem solving and team work is expected. The candidate must hold a Ph.D. degree (or evidence of its completion in the nearest future)

Contact: Candidates should forward a CV and references to jens.biegert@icfo.eu and simon.wall@icfo.eu. Contact icfojobs@icfo.eu for formal enquiries regarding the application.

This document contains more information about the network:  MEDEA-Flyer

STSM: Atomic Theory for the description of attosecond experiments

During the last decades laser source  technology  has seen substantial  progress.  In the spectral range from  extreme ultraviolet to soft X-rays
highly coherent, short pulsed, radiation, can now give access to  time resolved information  of elementary charge-transfer processes in atomic and molecular systems.  An accurate theoretical description, using either ab-initio methods or models, is seminal for the understanding of   the features appearing on the attosecond time scale, and for the interpretation of the sometimes cumbersome results obtained in experiments.

Angularly-resolved experiments on rare gases with the RABBITT -technique  (reconstruction of attosecond beating by interference of two-photon transitions)  have recently been performed by the group of Ursula Keller at ETH, in Zürich,   demonstrating an angular anisotropy
of the photoionization delay.  This anisotropy  is clearly seen even in  helium where both the initial atomic state and the final ionic state are isotropic, and is there solely due to the second photon being exchanged in the RABBITT process, allowing for final quantum states with two
different symmetries.  The groups in Madrid and Stockholm have used different approaches, both ab initio and models, to account for the anisotropy.
In the next step also the results in neon and argon have to be explained and here we want to combine the approaches and use transition matrix elements calculated in Stockholm in the model that has been developed in Madrid

The helium results are submitted as a joint experimental and theory paper, and the calculations  on argon and neon  started during the STSM.  The results will be published later this year. 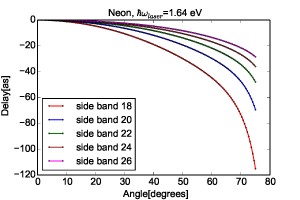 Figure caption:
Calculated angular dependence of the photoemission delay in neon for different photoelectron energies. The angle is measured relative the linear polarization axis of the laser field, and the  delay is given relative that in the forward direction. The calculation is done using lowest order perturbation theory for the light-matter interaction and with many-electron effects included at the level of RPAE (random-phase approximation with exchange). Highly excited molecules tend to fall apart, usually by losing an atom or a small molecule. At sufficiently long time scales they will also emit photons. Recently, an extremely efficient radiation channel has been found in a few carbon based molecules. The purpose of the experiments was to search for a similar effect in a list of other molecules, using the electrostatic storage ring ELISA.
The molecules studied were of the PAH type, i.e. containing an aromatic ring, and were positively charged. The quenching radiation, known as recurrent fluorescence (RF), was measured by the exponential decay of a one photon laser induced signal.
The measurements will be published in an article in a peer-reviewed journal. I expect that the visit is the start of a long-term program that will take place at different storage rings and give important input for the modeling of circum- and interstellar clouds.