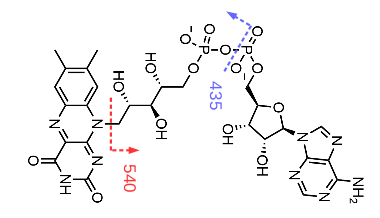 The purpose of this Short Term Scientific Mission (STSM) was to investigate the photo-induced dissociation of flavin adenine dinucleotide (FAD) anions in vacuo. These experiments utilized the Sep1 accelerator mass spectrometer complex at Aarhus University, Department of Physics and Astronomy. Our scientific aim was to assess the plausibility of the proposed role if FAD in the perception of magnetic fields by migratory birds. Using a combination of optical spectroscopy and mass spectrometry techniques known as action spectroscopy, we investigated the excited state photophysics and relaxation dynamics of isolated FAD anions.

At Sep1, FAD anions were transferred into vacuum by electrospray ionizaton and accelerated to 50 keV. The photo-induced dissociation (PID) mass spectrum was recorded by irradiating mass-selected FAD anions with a high-intensity pulsed OPO laser at a fixed wavelength and separating the daughter anions with an electrostatic energy analyzer. For the most abundant daughter ions, excitation energy (wavelength) dependence measurements, so-called action spectra, and pulse energy dependence measurements were performed. A surprising result was the observation of dissociation channels activated by the absorption of a single photon, and which were much less prominent in collision induced dissociation (CID) experiments. This suggests that ultrafast excited state processes may lead to non-statistical fragmentation of these ions.

This highly productive STSM resulted in a wealth of new data on the photo-physics FAD anions. After further analyzing these results, including computational modeling of the dissociation processes, we will prepare a manuscript for publication. We expect follow-up measurements and experiments on similar systems to lead to a long a fruitful collaboration between Stockholm and Aarhus Universities.