A detailed knowledge of the response of complex molecular systems to ionization or excitation and its influence on chemical reactivity is required to fully understand processes in astrophysical environments, planetary atmospheres as well as mechanisms associated with radiation damage. The study of such systems requires the support of theoretical investigations. However, a meaningful comparison between experimental and theoretical results requires the knowledge of the energy transferred in the radiation interaction. This is straightforward in photon absorption processes, but in case of ion interaction very difficult as collisions occur at different impact parameters, thus associated with a wide distribution of energy transfer. Recently, the joint effort of the CIMAP group (France), the CNR-ISM group (Italy) and the UAM group (Spain) has proposed a new method to determine of energy-transfer distributions in ionizing ion-molecule collisions via photoelectron-photoion coincidence experiments in the case of thymidine molecule (S. Maclot et al, Phys. Rev. Lett. 117, 07321 (2016)).

The objective of the present mission to the Elettra Synchrotron (Trieste, Italy) was to investigate the state-selected fragmentation of furan (a prototype of planar five membered hetero-aromatic compounds) and glycine (the simplest amino acid) molecules in the valence and inner valence ionization region. Figure 1a) shows obtained photoelectron spectra (PES) at 60 eV for glycine molecule. Based on obtained PES we selected binding energy values in vide range from the ionization threshold up to 30-40 eV to perform Photoelectron-Photoion Coincidence spectra (PEPICO), see Figure 1b).

The obtained results will be implemented in the proposed method to determine energy transfer ion –molecule collisions. Our aim is to fully validate the proposed method and to estimate the energy transfer in ion collisions with different impact parameters. The CIMAP group, from the French ion beam facility (GANIL), has already measured mass spectra for different ions (He2+, O3+, O6+, Ar11+ and Xe25+) at for glycine molecule and the experiments with furan molecule are planned in this year. 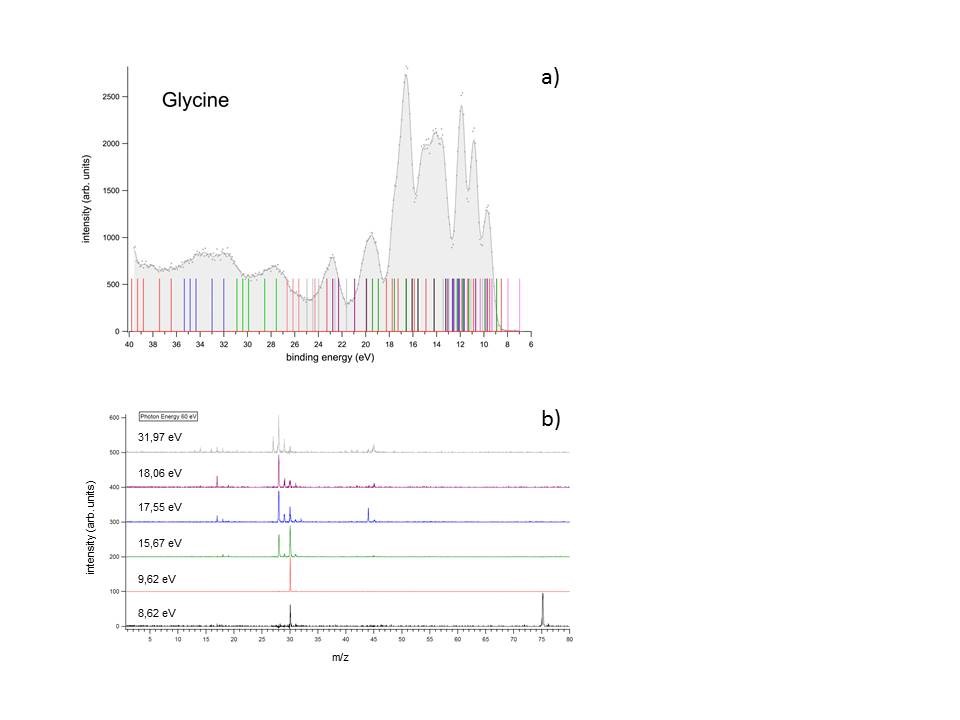