Experimental studies of biological bulk systems (proteins, DNA) tend to obscure the details of photoinduced reaction mechanisms due to the influence of the environment. Therefore, experiments with clusters of small molecules of biological interest offer an elegant solution to the problem mentioned above.

We combined the synchrotron radiation with the ion mass spectroscopy to study gas-phase clusters of acetamide, (CH3CONH2)n, and acetic acid molecules, (CH3COOH)n, produced by the supersonic expansion source. Clusters of studied compounds are capable of contributing to C–H…O=C, O–H…O=C and N–H…O=C types of intermolecular hydrogen bond interactions that play an important role in biology, being responsible, for example, for the structural organization of proteins. We explored photodissociation pathways of the clusters using mass spectroscopy as well as their electronic properties as a function of their size using partial ion yield (PIY) technique, where an array of time-of-flight mass spectra was measured at increasing photon energies (see PIY map of acetamide clusters and extracted PIY curves in Fig.1).

Our study showed that almost identical structures of the studied compounds that differ only by one functional group result in different photodissociation behavior under vacuum ultraviolet ionization. They both readily undergo dissociation by proton transfer; in acetamide clusters, proton transfer mainly occurs from the amino group, while in acetic acid clusters from the hydroxyl group. The second fragmentation channel for acetamide clusters is multistep ammonia ion transfer that was detected for clusters up to tetramers, while in acetic acid clusters, only dimer fragments by the methyl group loss (not a transfer). The structures of the ionized dimers were optimized, and the proton transfer and ammonia transfer processes probed using ab initio calculations.

As an outcome of the visit, the initial draft for the publication with reported experimental ionization and appearance energies of the clusters and their fragments was prepared. 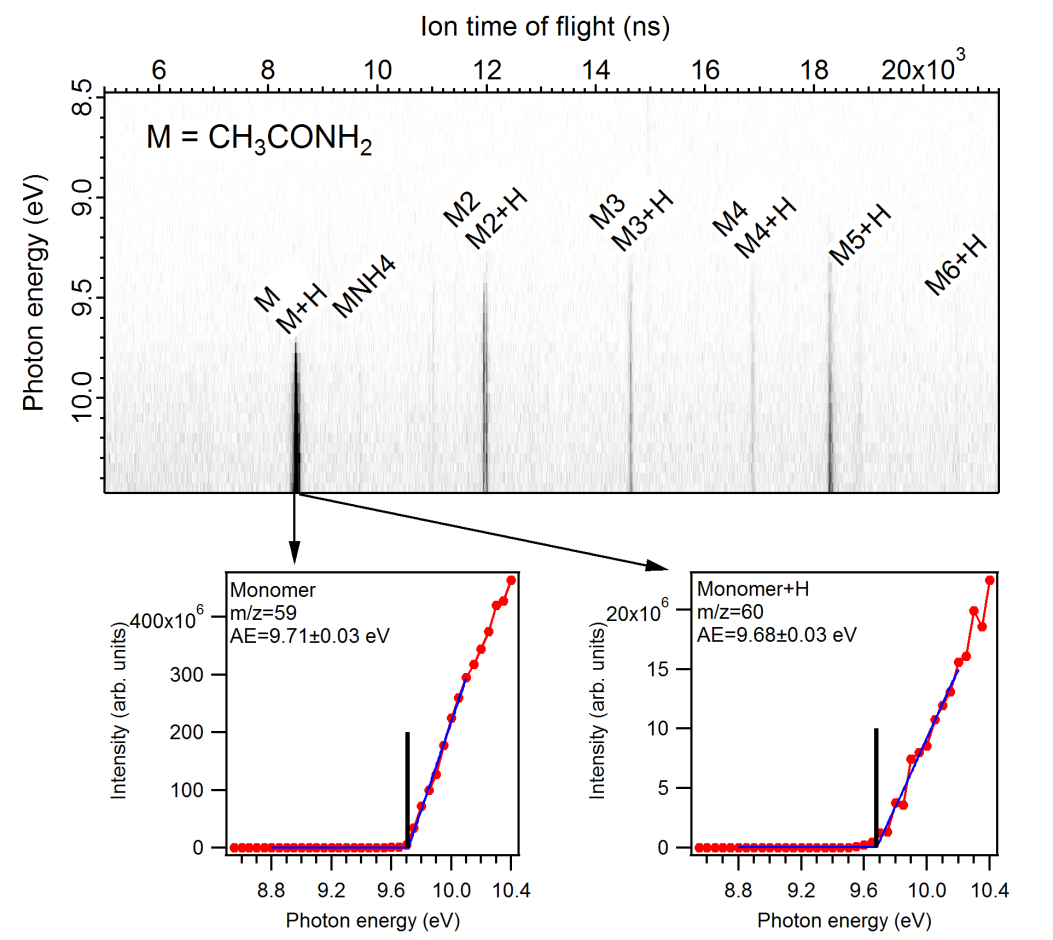 Fig. 1. Partial ion yield (PIY) map of acetamide clusters plotted as ion flight time versus photon energy. Below that are extracted PIY curves of acetamide monomer and protonated monomer. Blue lines represent the fit to the curves. The intersection point of the lines (marked with vertical black line) is assigned to the ion appearance energy (AE).